blue star stitcher
I love anything creative...I am a busy mom of three (+4 dogs, 1 bird, 1 bunny, and 1 sweet husband) who sometimes wishes I had more time/energy/talent to devote to just being creative!

Back from summer vacation 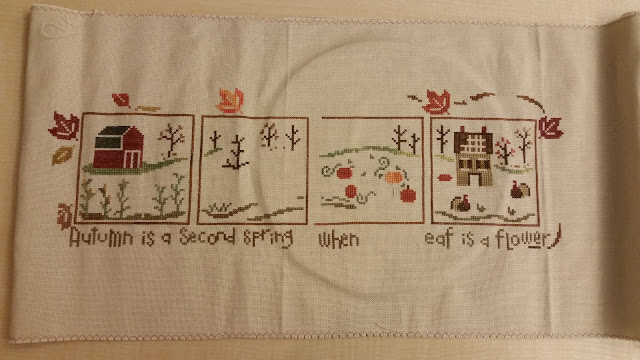 Yikes, I haven't posted since June! Summer has been busy this year, and I am looking forward to the routine of the school year.  We spent summer at the beach and Disneyland and in our pool. Of course our air conditioning had to give out for three days in the middle of July which was no fun to suffer through but we survived. Obviously from my stitching choices I am also looking forward to Autumn, and fall decorating. Above is a Bent Creek WIP, Autumn Snapperland. When I started this I only had the squares and the barn done, so I have made some good progress already. Still trying to whittle away at my WIP basket. 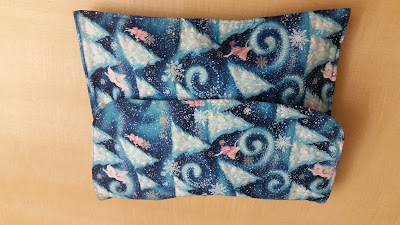 Kathleen sent me this project bag as a thank you for sending her some charts from my stash unload. It is so cute, it has pink gingham fabric on the inside, and then the little pink fairies on the outside. I am already using it to take my stitching back and forth to work with me. I may have to watch some of the tutorials to figure out how to make more of these for myself. Until now I have just been using gallon Ziploc bags. 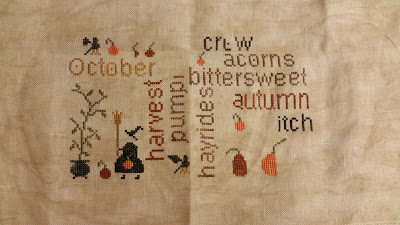 More of my Wordplay Charts. I started on September (photo below) but of course was itching to start on October. So I have been working on them both at the same time. You can see which one has gotten more attention, ha! I love the little witch and pumpkins and crows. 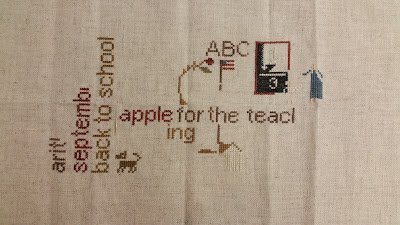 What I've been reading this month: Beneath a Scarlet Sky by Mark Sullivan. I cannot say enough how good this book was. It is about WWII in Italy, I did not know much about this part of history when I started the book. The narrator is a driver for a Nazi general stationed in Italy. The general started his career as an engineer, and is in charge of supply and ammunition. His character was interesting in that he did not support most of the atrocities of the Nazi party  and he had the mindset that if they were going to win the war the countries they conquered shouldn't be left hating them. Some of the book is of course very sad, but it was a very good story with great characters and is based off of a true story. Highly recommend it.

What I've been watching this month: The Girl With All the Gifts. This is a British zombie movie that just came out last year. I don't remember seeing it in theaters here, but it may have been (we don't get out to the actual movies too often with a toddler at home). I like zombie movies, but don't like overly gory/bloody movies (I know that's a contradiction in itself). Scary=ok, Gross= no thank you. This one had a really interesting premise/twist to it, and was not overly gross. The end of the movie made me really pause and think. I just love taking a chance on a movie I haven't heard of before, and having it turn out this good.