blue star stitcher
I love anything creative...I am a busy mom of three (+4 dogs, 1 bird, 1 bunny, and 1 sweet husband) who sometimes wishes I had more time/energy/talent to devote to just being creative!

Pink roses, pink tulips, and not so pink lemonade. 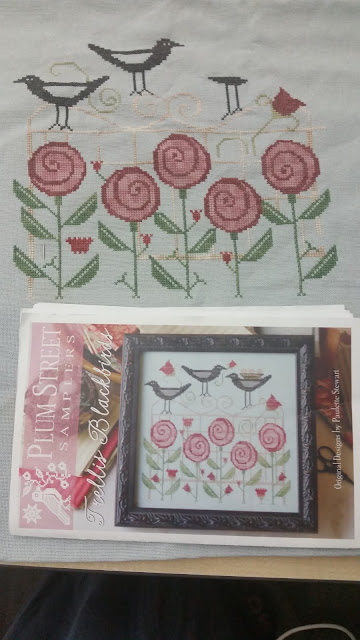 Update on Blackbird Trellis. All of the leaves are now done, and all of the roses too. I had to order another skein of thread for the third blackbird, and am filling in the rest of the trellis while I wait for it to arrive. I have not started anything new, and my goal now is to finish this and Autumn Village + one quilt project by the end of April. 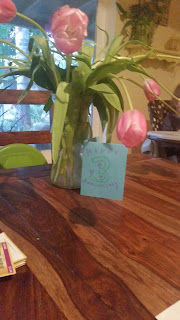 Last weekend was our third anniversary, and sweet husband brought home beautiful pink tulips and a handmade card. He makes cards for all of our special occasions, and writes the sweetest love notes inside. I am terrible at writing anything in cards, I am always a little tongue tied. I am a lucky wife though. 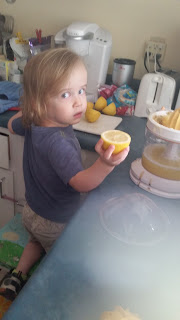 And here is my sweet toddler helping me juice lemons. He was so upset we were throwing away the peels once we had juiced them, He kept trying to dig them out of the trash bag to re-squeeze them, funny boy. So I now have gallons of lemon juice in my freezer. We actually don't have any lemon trees in our yard, but our neighbors have two huge trees that overhang our wall, and drop about a dozen fresh lemons each day. The smell of the blooms is heavenly, but I don't know what I am going to do with all this juice. I feel bad just throwing them away though. Lots of lemonade this summer I guess. 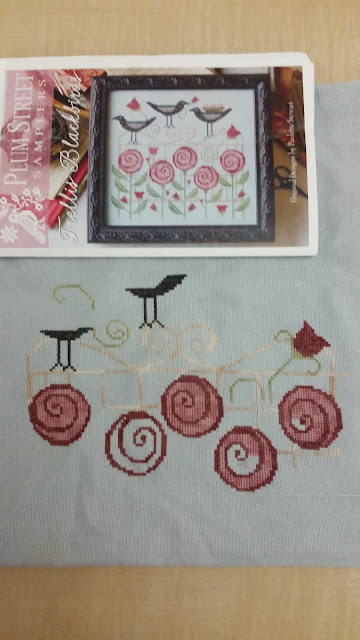 Progress on blackbird trellis, 4 out of 5 roses mostly filled in. I am waiting on two skeins of thread to come in to start on the smaller buds (GA Pomegranite) and the leaves (GA Baby Spinach). I have enough to work on this week though, finishing the roses and the blackbirds.

I think I have come up with a stitching rotation for this year. I am going to start one new project a month, and not stress so much about getting through my WIP box. So my project for March I have decided is going to be Spring Hare by La-D-Da. I still have Autumn in the Village (January's start) and Blackbird Trellis (February start) and will just divide my time amongst them. 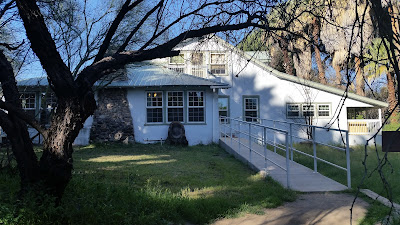 Here is last weekends roadtrip. We drove up through Wickenberg, to the west of Phoenix, and found a nature/hiking preserve along the Hasayampa River. It was so nice to get out of the desert, and hike along green meadows and a pretty creek. 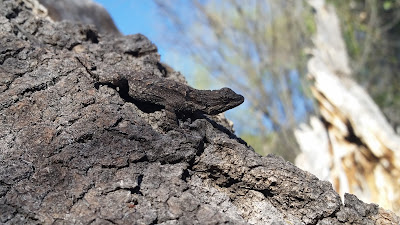 Here is some of our desert wildlife, a lizard camouflaged against the tree. 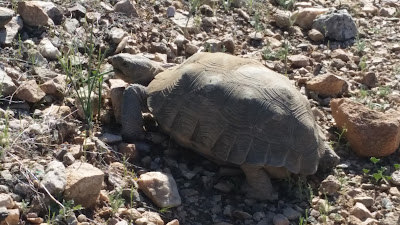 And a desert tortoise, he was right along the side of the trail, and if he hadn't been hiking himself I think we would have mistook him for just another rock! 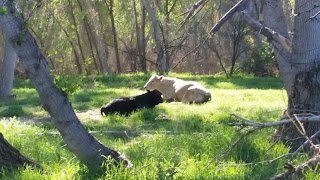 Not really "wildlife" per se, but some cows resting in one of the pretty green meadows. 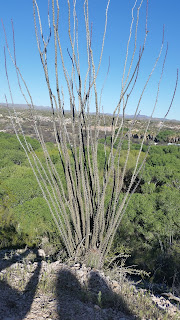 A desert ocotillo on top of the hill. It is a form of cactus, in the spring all of the spines bloom and are quite a display. 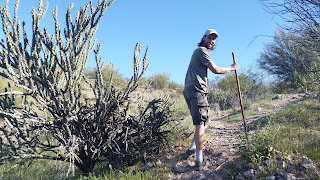 My husband hiking up the hill. 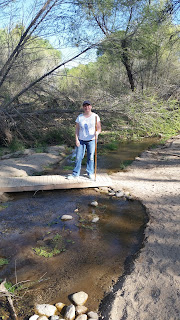 And me posing on a little bridge over the creek. 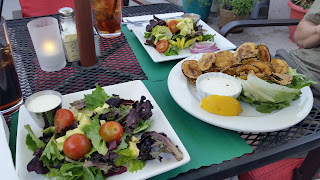 When we were all done hiking we went a little farther up the highway and stopped at a tiny cafe attached to a gas station in Congress, AZ. It was such a small town it only had one stop light, so imagine our surprise when we walked in and they asked if we had reservations! Well of course we didn't so we had to sit out on the patio, the restaurant itself maybe had 15 tables in a tiny little two rooms. The patio was pretty enough, and our weather has been so nice it was not a big deal. We weren't expecting much, but the food was amazing! Above is a photo of our salads/appetizer (zucchini chips). I had shrimp & lobster tacos for dinner, and my husband had shrimp linguine. If you ever find yourself out West in Arizona, the name of the place was Nichols West. From the outside it doesn't look like much, but the food was better than most you would get in the city.

So a fun roadtrip weekend, and now I am back to the usual school week/work week, day to day. Hope your week has started off well!